It is obvious that the crisis of personal identity is universal, any place is this world which inherits multi cultural and multi-social community faces this issue to quite a large extent. For every individual, traveling from the comfort of his/her home town and living in a completely different place, makes one feel insecure. One wants to belong and feel the city in one’s veins. Young artist like Venu has taken significant instances of a critical engagement with self imagery .The personal has become political; and the lived experiences is engaged in creating a dialog in a narrative context.
The artist’s younger contemporaries have subversive strategies with the language of painting; humor and wit are part of these stances. These artists have constantly pushed the limits of representation and the use of the body with these strategies. They emulate the conscious interplay of text and image, virtual and real in the zones of hyper-modernity. This show also brings into the focus aspects of autobiography and self –consciousness about the subjectivity. The uses of semiotic inter - textuality triggers the younger generation to relate to fantasy, consumerism and the ability to locate the self in the context of the nation state.
Bangalore has been an inspiration as an outsider for Venu. He felt misplaced; the body of works created for his first solo show in 2003 where the result of his approaches towards the multi-cultural, socio-economical situations of surrounding. Since then, articulating the process of fixing identities in this ever changing world became a major subject matter of his works. His preoccupation included the images extracted from ads, billboards, concrete structures, towering glass buildings, flyovers, pavement tiles etc. This thought process continued, although many other issues like water crisis, environmental concern came into the work later. In the recent water colour series titled 'couple', he has tried explore human sensibilities.
Venu is exploring introspective actions of humans in the drama of life and sexuality he portrays multiple aspects of humans and explores the paradox of their existence. The pressures of living and working in the urban context also involves the strategies of survival and negotiations between art and life.
His images are caught between complex situations and dilemmas of reality. They are self critical of our times, they are full of introspection. The figure is seen as part of the hinterland dream and reality, using domestic props, everyday objects like jackets for apples. He uses close-ups of fragmented hand gestures in action. The artist also explores the possibility of using stop motion animation as part of visual language and continues to nurture representation through drawing from life, in his recent short video. Venu’s figuration represents the here and now, and portrays an interpretation of everyday reality. The artist nurtures the fragile feelings of human emotions to construct meaningful imagery from his lived reality. 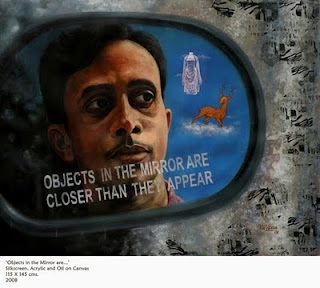 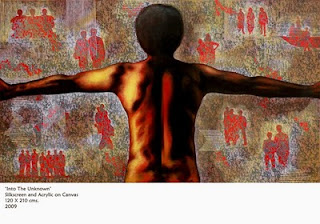 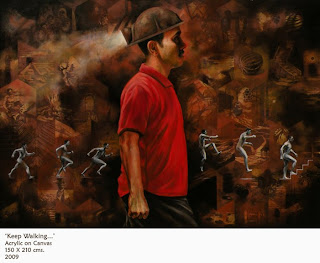 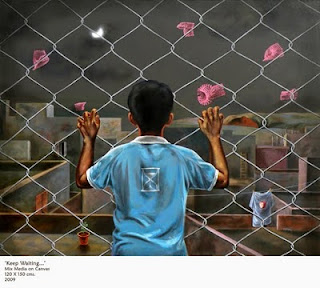 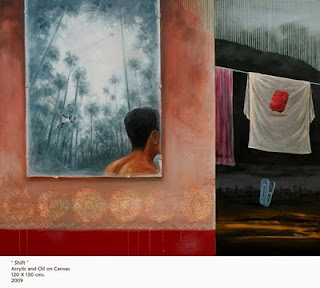 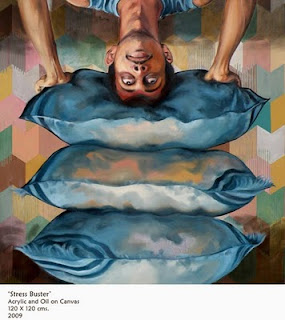 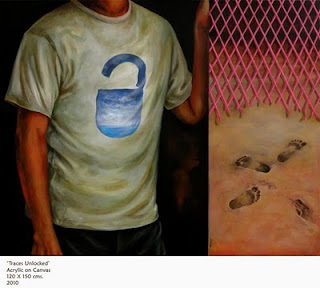 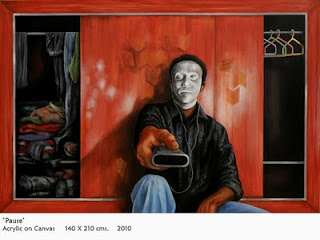 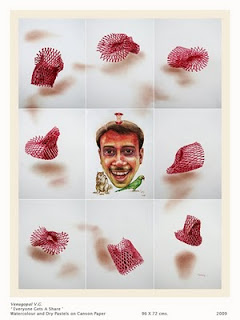 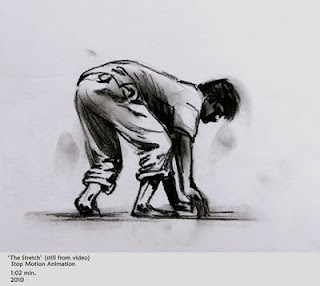